The Parliament House in New Delhi was just 10km away from the reach of Yamuna’s turbulent and menacing waters. Given the river’s mood, the possibility of the water reaching there wasn’t completely out of question. A newspaper alarmingly predicted that the Rashtrapati Bhawan too would be flooded. But it, and the sanctum sanctorum of Indian democracy, remained safe. What didn’t was, Jehangirpuri, a slum located far-off in North Delhi, where houses were submerged and only rooftops pimpled the landscape.

Its residents, nearly 1.5 lakh in number, flocked out as water level rose alarmingly. Some stubbornly stayed back to salvage their belongings, only to find themselves marooned on their crumbling rooftops because Yamuna’s whooshing water was unsparing. As panic-stricken people started taking shelter elsewhere, loot became common in the locality, which was set up on the floodplains of Yamuna during the Emergency.

For days to come, filth and stench blanketed Jehangirpuri. Its people were living their scariest nightmares with their lives turned topsy-turvy. Floods weren’t alien to them but this scale was.

The year was 1978 and the month September. It was the time of the year when monsoon is generally at its fag end. Agricultural fields, especially in the Indo-Gangetic plains, are lush with paddy, drenched sufficiently in monsoon showers; people by now have had enough respite from the scorching sun; headlines on vector-borne diseases dot newspapers; and in Delhi, the temperature hovers around 30 degrees Celsius while the air is irritatingly humid, but bearable.

In India, floods in September are rare; massive ones, even rarer. On the contrary, this is a month when floodwaters start receding everywhere. But in September 1978, the floods broke previous records and set many that remain to be broken.

“Bearing all barriers and records of nearly a century, the rivers of North India conspired with the monsoon to erode signs of civilisation. Sweeping through the state of Haryana, sections of the capital city of Delhi, and through the landscape of Uttar Pradesh, Bihar and West Bengal, the fury of flood spelt death, destruction and disease,” was how the September 1978 cover story of India Today magazine started its reportage on the calamity. July 24, 1994: A man salvages his belongings and carries them to a safer place after his hut was submerged by the swollen Yamuna following heavy rains in Delhi. Floods and rains across India had claimed more than 600 lives in that year by then. (Photo: Reuters)

Travelling through the corridor of time over the past decades, one finds that its walls were regularly imprinted with calamities like the one India weathered in 1978. Some were of similar magnitude, others far more catastrophic.

You need not travel far in your mind’s eye to recall the harrowing images of storeys of concrete buildings being washed away like decks of cards in the violent waters of Mandakini and Alaknanda (tributaries of the Ganga) in Uttarakhand in 2013.

The month was June and the Char Dham Yatra (an annual pilgrimage to the Hindu shrines of Kedarnath, Badrinath, Gangotri and Yamunotri) was at its peak in the mountains.

It was a year when death and destruction literally poured in from the skies in ‘Devbhoomi’ (the adobe of Gods) as Uttarakhand is commonly known.

A double whammy of incessant rain and melting of a massive glacial lake just above the temple town of Kedarnath made Himalayan streams swell into seas of fast-flowing water. Their wailing torrents swept, buried and destroyed anything and everything that came in their way.

Left behind were lives prickled with needles of uncertainties and a plundered terrain where life once marinated in the hotchpotch of everyday mundaneness.

If 2013 is too far to travel back, one may also recollect the visuals of widespread devastation in Kerala during the monsoon downpour of 2018, a year when the state suffered its worst disaster in 100 years. August 23, 2018: A man removes debris from a collapsed house after floods in Paravur, Kerala. (Photo: Reuters)

This year too, floods have wreaked havoc in Assam, Kerala, Uttarakhand, Tamil Nadu, Madhya Pradesh, Maharashtra, Gujarat, Himachal Pradesh and Bihar, among others states. More than 200 people have died in rain-related tragedies across the country and damages to property runs into thousands of crores.

TIMES CHANGE BUT SOME THINGS DON’T

India’s political spectrum has undergone rapid transition over the last 65 years. Governments changed, leaders rose and fell, parties were formed and exterminated, issues and priorities too saw a sea of change, but what remains an eyesore is that despite their annual nature, floods continue to maim states, claim hundreds of lives and ravage valuable resources.

Geographically, India is located in a zone that is climatically very sensitive and bears a heavy population burden. It is one of the countries where the impact of global warming and climate change can be seen and measured tangibly. The rapidly melting Himalayan glaciers and the receding shorelines of islands in the Sundarbans are ready-to-refer examples.

Overall, it is estimated that 40 million hectares of land (roughly 12 per cent of India’s geographical area) is prone to floods. While floods occur in India every year, data for the last 65 years show that the scale of their impact, in terms of area affected and damage caused, has been erratic.

When data on damages suffered in floods in the past 65 years stare at you, there appears to be little difference in how India’s richest and poorest, developed and ‘Bimaru’ states prepare for and work after floods. Everywhere it is a story of death and misery that repeats year after year.

In terms of damages suffered in floods and heavy rain, the year 2015 was the most catastrophic for India. Data from the Central Water Commission show that the country’s total loss due to floods in 2015 was Rs 57,291.1 crore. Of this, 45 per cent (Rs 25,912.51 crore) was in Tamil Nadu alone. October 29, 2005: Stranded passengers standing on a derailed train near Hyderabad. Up to 150 people were feared killed when seven coaches of a passenger train derailed after a bridge collapsed in heavy rain. (Photo: Reuters/ANI)

The winter of 2015 was one that people of Chennai will remember for many years, but for the wrong reasons. It was a year when within a few days Chennai was flooded at a scale never seen in the past 100 years.

The city came to a standstill as its residents were stranded in their homes. That winter, rainfall in Chennai was nearly three times the normal level. Some estimated that it was the world’s eighth most expensive disaster in 2015.

If we look at the year-wise damages suffered in the past 65 years, we find that the scale of destruction has increased exponentially in the last two decades (see chart below).

Over the years, this difference widened and between 2013 and 2017, the loss India suffered due to public property damaged in floods was 112 per cent more than that suffered due to damaged crop.

One of the likely factors responsible for this shift over the years is the increasing urbanisation in India and migration of people from rural areas to urban centres in search of job and better opportunities.

Besides this, as the Indian economy strengthened over the years (resulting in increase in people’s incomes and living standards), the size of Indian cities also increased manifolds. But while cities became larger, the flood management and drainage systems failed to catch up with the need of the hour.

The best examples for this mismatch is the plight of India’s four metropolitan cities – New Delhi, Mumbai, Chennai and Kolkata – during monsoon every year. Despite being India’s four most important cities, every year newspapers are splashed with images of these cities heavily flooded during monsoon rains. Deaths, destruction and agony have become the sad reality for these urban giants, despite their corridors of power and lanes of skyscrapers. 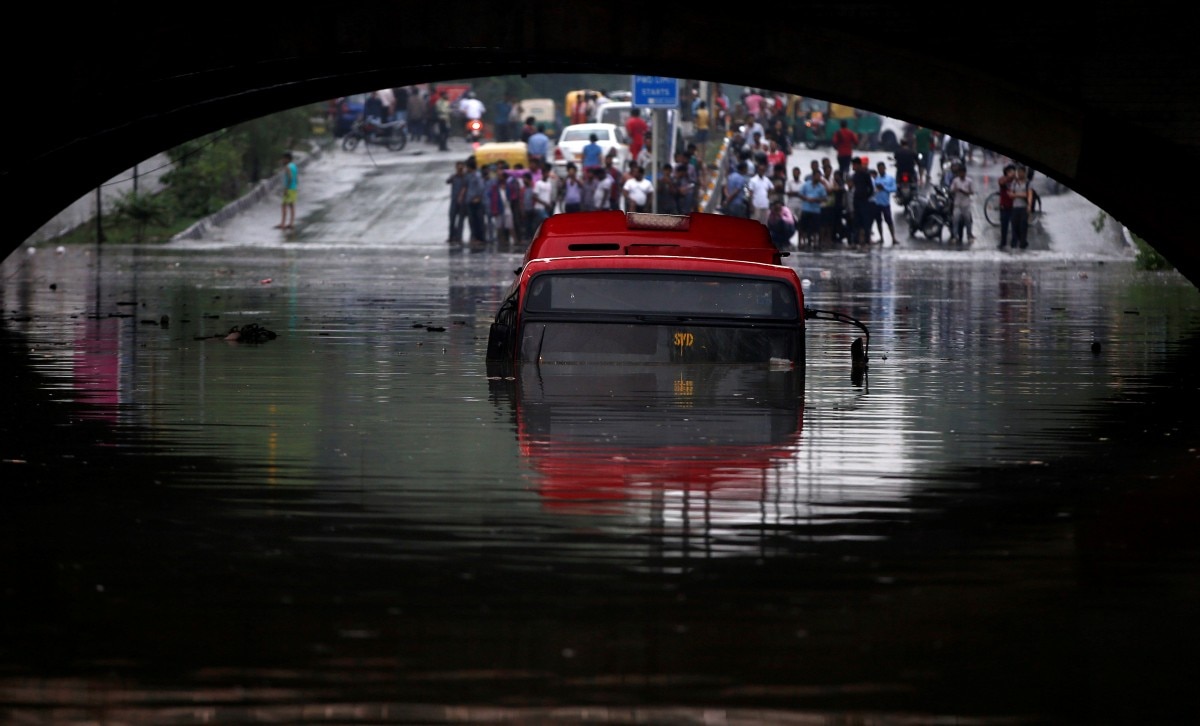 July 13, 2018: A bus gets submerged on a flooded road under a railway bridge after heavy rains in New Delhi. (Photo: Reuters)

Another aspect of floods-related damages in India is that the total area affected by floods and the total damages suffered may not necessarily tell the same story. Flood data for the past 65 years dispels the perception that years that saw widespread floods (in terms of area affected) were also the years when damages were the most.

Thus, what this indicates is:

1) The damage caused by floods in a given year need not necessarily be dependent on how widespread the floods are.

2) Years which claim more lives need not necessarily be the years that suffer maximum damages.

Given the fact that India is among the countries most affected by global warming and climate change, scientists have predicted that floods and drought will become more frequent in India. The data for the last 65 years support this assertion and show that the area affected by floods in India does not follow any pattern.

One year you may see widespread floods, while the next year the situation may be the complete opposite.

Besides the monsoon rains and occasional cyclone-induced rains, the melting of Himalayan glaciers is a major source of flood in India. With the rapid increase of global temperatures coupled with incidents of forest fires in the Himalayan slopes becoming more regular and intense, glaciers have started melting at an alarming rate. This increases the total volume of water in the rivers, which becomes catastrophic, especially when monsoon-laden clouds reach the Northern plains and hit the Himalayas.

The most recent and devastating example of the two flood-inducing factors merging in this manner is the 2013 Kedarnath tragedy in Uttarakhand. Incessant monsoon rains aside, the disaster was aggravated by the sudden melting of the massive Chorabari Glacier, just above Kedarnath.

According to the World Bank, “India is among the countries most vulnerable to climate change. It has one of the highest densities of economic activity in the world, and very large numbers of poor people who rely on the natural resource base for their livelihoods, with a high dependence on rainfall.” September 19, 2004: A woman wades through a flooded street, to collect drinking water in Singhamura, West Bengal, near the Bangladeshi border 170 km north of Calcutta. (Photo: Reuters)

In a recent paper published in Current Science, scientists from India Meteorological Department, National Geophysical Research Institute and National Disaster Management Agency, among others, reiterated that global warming is resulting in increased extreme rainfall in India.

“In recent decades, warming trend over the Indian Ocean has potentially enhanced moisture supply leading to rainfall extremes in the country,” the paper said. The researchers said abrupt variability and increased uncertainty in rainfall patterns pose “ever-increasing risk” of flood disaster in India.

While these figures and studies give us a sense of the tragedies that people in India weather every year, they do not convey the emotional trauma and mental agony people suffered, suffer and will continue to suffer unless things change.

For instance, in August this year, researchers at Madras University in a study found that schoolchildren who witnessed the 2015 Chennai floods showed symptoms of anxiety and were found to be “mentally traumatised”. The researchers also found that children from areas that were severely flooded showed increased symptoms of trauma.

As India stares and embarks into a future of climatic uncertainty, what remains certain is that death and destruction due to floods will continue to maim the country unless it finds a far-sighted flood management mechanism.

Data such as the one presented above may shock you, but the shock of seeing a loved one swept away in flood water, get buried in a landslide, or die suffering from disease that follow floods is far more shocking and painful. It can be only be felt. Numbers are numbers, they scream but don’t feel.

RECAP OF WHAT FLOODS HAVE COST INDIA