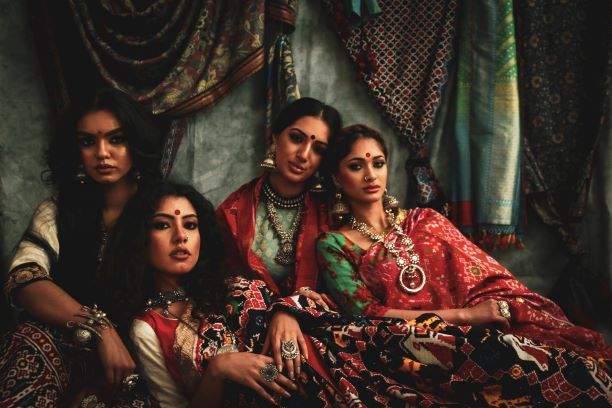 For UK-based Indian designer Ayush Kejriwal, who is renowned for his smartly designed traditional Indian fabrics and saris, with a hint of eccentricity, the whole concept of  what’s trending and what’s not is relative. “I don’t believe in the whole concept of fast fashion or fashion trends. For me something that is beautiful today will still remain beautiful tomorrow, the day after and many days after that too”, he says.

With summer on its way, we caught up with the couturier, who has no formal degree in fashion, to find out about the looks he has created for this season. He lets us take a peek into a few highlights of his collection for the summer of 2019.

Ayush is currently playing with traditional Benarasi saris with embellished borders in primary colours. “I have played with clashing prints and different embroidery techniques to create a cluttered look,” he tells. For instance, a marori embroidered border has been touched with gotawork and sequins to create a rather unusual effect. The gold in the border has been contrasted with the silver zari of the Benarasi sari.

Each piece of sari made by Ayush takes about six months to make since he is extremely particular about details. “If you look carefully you will see nothing is coordinated but the overall look is still very cohesive and that is the beauty of it,” adds the soft spoken designer, who doesn’t believe in an iota of make-up.

Ayush has also developed a whole new collection of some gorgeous kalamakri artwork that will be painted on kanjivarams, linen, tussar silks and finished with mukaish and badla work from Lucknow. The saris are bright in colour with striking hand painted murals depicting various animals including lions, peacocks, horses, elephants, deer and floral motifs.

Besides, the couturier is currently finalising some striking patola patterns that will be launched this summer. “These are colourful and extremely beautiful. I have played with some non-traditional patterns that have been mixed with traditional elements woven in Patan and it has taken me over seven months to bring them to life. You will see motifs like bright red roses paired with yellow mustard elephants with a touch of gold,”Ayush informs.

There are some very unusual jewellery pieces that are going to be a part of the collection, too. Made with pure silver and a touch of gold and precious stones, they create a powerful look adding to the allure. “I have used a variety of elements in one single piece to create a bohemian effect, which gives it a very unique characteristic,” Ayush explains.

For styling, Ayush feels that red lipstick with very little eye makeup, a nice bindi and hair pulled bask into a loose bun will go perfectly well with his saris.

“But the most important tip from me would be to love yourself exactly the way you are and dress yourself precisely the way you want to,” signs off the designer.

Price starts at Rs 14,000 for a basic handloom piece