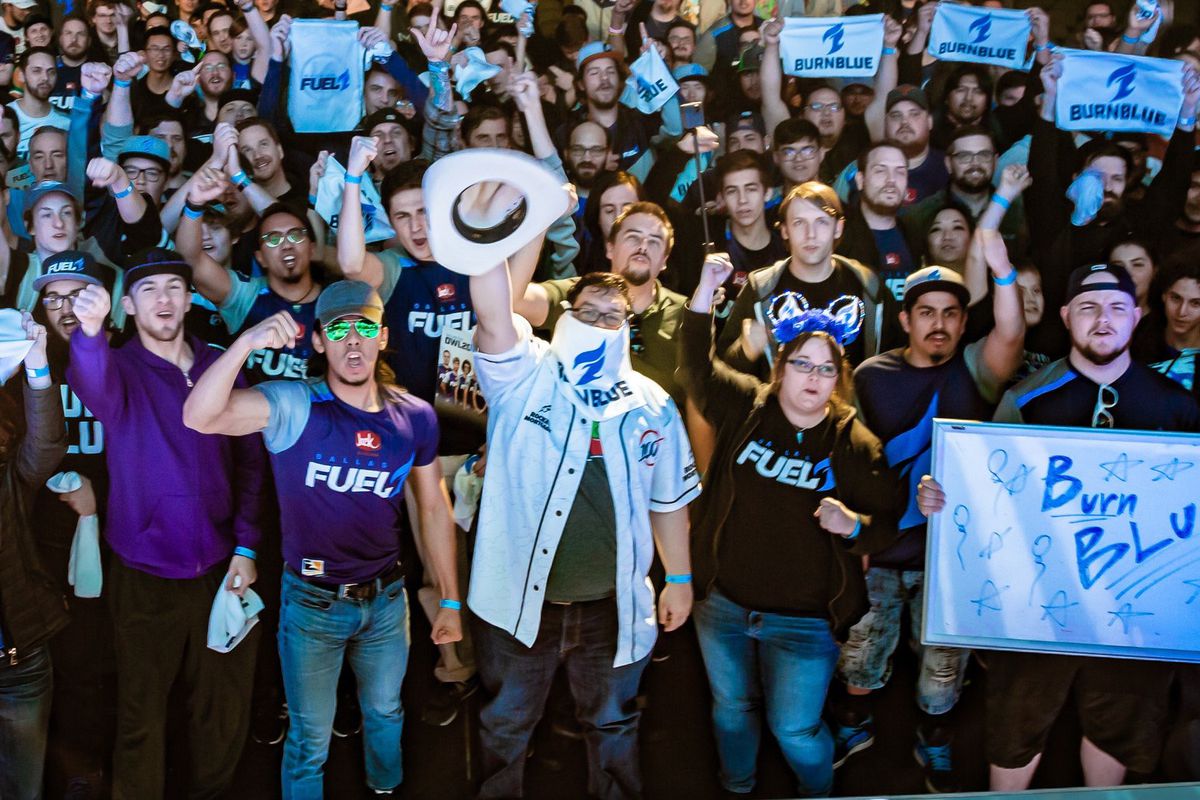 This weekend, the Overwatch League will broadcast a number of matches as per usual, but there’s going to be something different about the games this time: the location. Up until today, every regular season OWL match has been played at Blizzard Arena in Los Angeles, but the league’s ultimate ambition is to have each team play out of a home arena, much like a traditional sports team. The plan is to start home-and-away games during the 2020 season, but fans in Dallas can get a preview starting on Saturday.

Over the weekend, the Dallas Fuel will be hosting eight matches at the Allen Event Center, with a total of 9,000 fans expected to show up over two days. “Having essentially the first home game ever in e-sports history is a great honor for us,” says Fuel president Geoff Moore.

The festivities are part of what Blizzard is calling “homestand weekends,” which were first announced back in December ahead of OWL’s second season. In addition to Dallas, Atlanta will host matches in July, while the Los Angeles Valiant will do the same in August. But things will kick off in Texas on Saturday. The weekend will start with a match between the Paris Eternal and London Spitfire at 12PM ET on Saturday, and it will reach its peak at 6:15PM ET on Sunday when the Fuel take on state rivals the Houston Outlaws.

The idea for these experimental home games began last fall when Blizzard reached out to the league’s original 12 teams. Moore says that the Fuel leadership immediately knew they wanted to be a part of it. “We had a strong desire to learn more about our home market and their desire for our team,” he explains. “And you learn by doing.” The process started in November when the first homestand weekends were confirmed at an owner’s meeting, and the Fuel began discussions with around five Dallas-area venues before settling on the Allen Event Center.

READ NEXT: WHY COMPETITIVE GAMING IS STARTING TO LOOK A LOT LIKE PROFESSIONAL SPORTS

The team had already experienced some minor success holding local watch parties and meet-and-greet events with Fuel players, but that wasn’t necessarily the best gauge for the viability of playing home games on a regular basis. “It’s great that you can draw several hundred people to a spot and have them be really interested,” says Moore, “but that’s a different thing than selling 4,000 tickets.” This weekend is a chance to prove there’s an appetite for live Overwatch games in the city.

The event series is a learning process — not just for teams like the Fuel, but also Blizzard itself, which handles the broadcasting duties for all OWL games. Right now, all of that happens in the comfort of Blizzard Arena, but the idea is to test out what that experience will be like on the road now before making the switch in 2020. “They can’t make every team replicate the Blizzard Arena, so they have to figure out when they go on the road, what sorts of conditions are they likely to run into, and what are they going to have to do to put on a quality broadcast,” Moore explains.

All of this preparation is leading up to the new direction for the league. The idea of city-based teams is still relatively unproven in e-sports. Only a few leagues have attempted it, the most notable being the League of Legends Pro League in China. Blizzard’s ambitions with OWL are greater, however, as it’s aiming to create a truly global league. The 20 teams in the league right now are spread across North America, Europe, and Asia.

Only a few clubs have revealed their arena plans so far, but it looks like there will be a mix of strategies. For instance, the Los Angeles Valiant will play out of LA Live, an existing 7,100-seat facility across the street from the Staples Center. The most ambitious announcement to date came from the Philadelphia Fusion, which plans to build a $50 million, 3,500-seat e-sports stadium called Fusion Arena. It’s being designed by Populous, the famed architectural firm behind Premier League club Tottenham Hotspur’s newly launched London stadium, among many others. “We’re taking our 35 years of designing iconic experiences for traditional sports — settings like Yankee Stadium — and applying those same principles of design to the virtual world of gaming,” Populous senior principal Brian Mirakian said when announcing the arena.

For the Fuel, Moore says that the team will likely spend the next three to five years renting a facility or multiple facilities before settling into an arena the team owns and can fully control. “We’re not so much in a rush to get into a permanent home,” he says. “We’re trying to find the right partners.”

“PEAK ATHLETES ADJUST TO THEIR CONDITIONS.”

While many of the arena plans are in place, there are still questions regarding home-and-away matches, most notably the added strain on players. Burnout was a big issue during the first season of OWL, and while Blizzard made some changes to mitigate it in season 2, player wellness still remains a hot topic. A number of players have been forced to take extended leave or retire all together due to the strain of playing Overwatch professionally. “I would rather be a streamer at this point in life and chill,” former Atlanta Reign player Daniel ”dafran” Francesca said when retiring a quarter of the way through the current season.

Moore believes that the schedule changes in season 2, which cut the number of games per season from 40 to 28, were a good start. He says that the Fuel will be offering various forms of physical and mental support for players, but he also believes that once travel becomes a prominent part of OWL, players will be able to adapt to the new reality. “Peak athletes adjust to their conditions,” he says, “and so e-sports players will be the same.”

There’s also the question of whether or not e-sports teams can support the added cost and logistical hurdles that come with home matches. While it’s still unproven, Moore and other OWL owners seem convinced that it’ll work, investing tens of millions of dollars into their teams and facilities. The hope is that, eventually, leagues like OWL will generate revenue on par with major sports like the NBA and NFL and that these new home stadiums and arenas will play a big role in that.

The question of sustainability will become even more important as other pro gaming leagues look to follow OWL’s lead. Blizzard has already announced plans to turn its Call of Dutyleague into a similarly city-based venture, and the success of those two could mean other leagues jumping in as well. The games in Dallas this weekend may have a festive atmosphere, with plentiful photo booths and cosplay, but they could also signal the start of something much bigger for the future of competitive gaming.