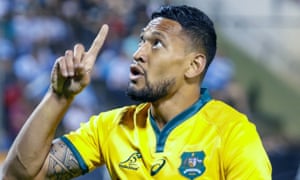 Several Super League teams have backed a letter from one club owner to Catalans Dragons warning them of potential legal action if clubs lose sponsorship money over the controversial decision to sign Israel Folau.

The Dragons announced on Tuesday that the 30-year-old had signed a one-year deal with the club, despite widespread opposition from the game to the move.

Clubs were told about the Folau deal minutes before it was announced, with Super League and Rugby Football League bosses insisting they were powerless to prevent the dual-code Australian international from signing a contract with the Dragons, despite controversial homophobic social media posts which led to his dismissal by Rugby Australia last May.

In a statement from both parties in December, the full-back said he had not intended to harm or offend people when he uploaded the post. It read: “Mr Folau wants all Australians to know that he does not condone discrimination of any kind against any person on the grounds of their sexuality.”

However, many Super League clubs have privately expressed their concerns to the sport’s hierarchy about the move, and tensions now appear to be reaching a head.

One leading owner wrote to fellow member clubs canvassing support to warn the Dragons that if major sponsors withdraw in light of Folau’s arrival, Catalans could be held responsible for any losses.

The Guardian understands that up to seven clubs endorsed the letter, which has now been sent to Catalans. No sponsors have yet hinted they may withdraw their backing, however.

The Folau matter is at the top of the agenda at a board meeting between Super League clubs next Wednesday in Salford. The Catalans owner, Bernard Guasch, is expected to make a rare appearance at the meeting – the Dragons often send a consultant on their behalf.

Folau, meanwhile, is believed to have arrived in Perpignan on Friday, but it could be several weeks before he makes his debut.

When contacted by the Guardian, Catalans declined to comment.