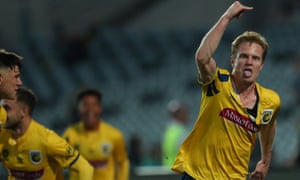 Actually, no, it probably occurred a couple of years later when Central Coast Mariners hosted Perth Glory on a New Year’s Eve so madcap that only cartoonist David Squires could make sense of the goals on wheels and replica rifle nonsense.

Hang on a minute! Peak A-League definitely happened on Sunday when the Mariners came from 2-1 down to win 3-2 with a brace of Matt Simon penalties in injury time, the second of which broke the record for the latest winning goal in the competition’s history.

That Simon – both the competition’s totem and spirit animal – drilled home the decisive goals (the second of which with a shirt ripped apart at the sternum following a fracas with Adama Traoré, an incident in which Simon reddened from his boots to his scalp like a chameleon stepping on a beetroot, while simultaneously executing a flawless impression of a wacky inflatable arm waving tubeman) caused smoke to billow from an exhausted meme machine. That’s without mentioning the involvement of VAR in multiple instances throughout the game. Or the red card for Victory coach Marco Kurz for abusing the fourth official.

Investing in the A-League is a commitment to climbing a mountain of cringe with false summits forever hiding the pinnacle. Broadly, this task is now met with gallows humour, and the shorthand “peak A-League”. It’s a coping mechanism. If we didn’t laugh, we’d cry.

But the danger is we laugh too long and too hard and in so doing warp our perception of the enterprise. A little self-deprecation is healthy, but too much can undermine. “Do you understand what self-deprecation means when it comes from somebody who already exists in the margins?” asks Hannah Gadsby in her award-winning show Nanette. “It’s not humility. It’s humiliation.” In the Australian sporting landscape the A-League exists in the margins, and we run the risk of humiliating ourselves.

There’s something peculiarly football-specific about it. Listening to sports radio in Melbourne is to cup a glass to the wall of a church preaching to devout believers in “our great game”, Australian rules football. In Sydney you’re never far from a reminder that rugby league is “the greatest game of all”. Rugby union is the game they play in heaven. Cricket is blessed relief from bushfires (apparently). The A-League? Daniel Georgievski out-bantering a high-profile TV news anchor in a rare headline free-to-air slot that was heading, predictably, down a cul-de-sac of lazy cliche instead of towards a deeper analysis of actual football.

If those closest to the competition are comfortable ridiculing it, what message does that send out to potential fans or investors? Moreover, why is there so much to ridicule, and what is to be done about it? Football Federation Australia’s new CEO, James Johnson, took his hot-seat this week; he has plenty to ponder.

Changing the mental shorthand used to decode football in Australia will take decades to bear fruit. Just look at the stigma still associated with supporter violence outside football’s heartlands.

The challenges are myriad. The A-League is far from unique in experiencing teething problems with VAR, nor is it alone in enduring IFAB’s appalling reinterpretation of the handball law. FFA doesn’t have – and has never had – the money to invest in proactive campaigns to win hearts and minds. It is only recently recognising the value of its social capital in leveraging government support, but it remains light-years behind in terms of the soft media that shapes discursive frameworks. There is only one broadcaster invested in the A-League, and they appear to be walking back their input. There are just a handful of writers and voices dedicated to domestic football, and only a small sum of those charged with sourcing news to keep the pot boiling. The A-League rarely leaks into op-eds or undedicated TV programming.

When everything went through the looking glass in Gosford on Sunday evening, for most of us, our ability to interpret, analyse and critique fell immediately on the shoulders of just Mark Bosnich, Tara Rushton and Adam Peacock. The Sunday evening off-Broadway time slot meant there were few other voices charged with facilitating our understanding of the mayhem in real time. I’m as guilty as anyone, I had already filed a column about Wellington Phoenix, betting the Mariners v Victory would be unworthy of 800 words of analysis. Instead, I posted a tweet likening Simon to a Peperami.

Following the great boardroom upheaval of recent years, football in Australia is drawing its breath and scratching its head, plotting what the future should look like. We should all aspire to great heights, perhaps even an un-ironic peak A-League.