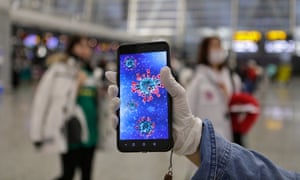 A video game about a world-ravaging pandemic that kills half of humanity has shot to the top of Apple’s App Store in China at the same time as three cities have been put into lockdown to halt the spread of the coronavirus.

Plague Inc, first released in 2012, is a strategy game in which players take on the role of causing a pandemic. They must evolve their pathogen, balancing infectiousness, lethality and visibility, in order to succeed at infecting and killing as many people as possible before humanity invents and deploys a cure.

It is not the first time real-world events have boosted sales of the game, according to Ndemic Creations, its developers. “Plague Inc has been out for eight years now and whenever there is an outbreak of disease we see an increase in players, as people seek to find out more about how diseases spread and to understand the complexities of viral outbreaks,” a spokesperson said.

“We specifically designed the game to be realistic and informative while not sensationalising serious real-world issues,” they added. The spokesperson urged gamers to “remember that Plague Inc is a game, not a scientific model, and that the current coronavirus outbreak is a very real situation which is impacting a huge number of people. We would always recommend that players get their information directly from local and global health authorities.”

Plague Inc’s sequel, a game about fighting a guerrilla war against an oppressive state, has also started rising up the Chinese App Store charts, moving from sixth to third place on the paid games chart over the course of Friday. Ndemic Creations’ website stopped working for a time, apparently collapsing under the weight of traffic.

In the run-up to the UK general election last month, Plague Inc partnered with a British charity, Full Fact, to produce an expansion to the game in which players took the role of malicious actors running a misinformation campaign, trying to spread fake news faster than fact-checkers could counter their claims. The charity’s chief executive, Will Moy, said: “This game will reach millions more people, helping them to understand the real threat that bad information poses to their vote.”