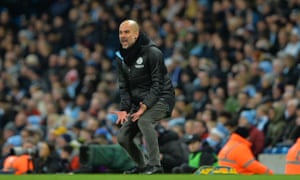 Manchester City have lodged several complaints with the Premier League over their Christmas fixture list in which they will play two games in less than 48 hours and then have only two clear days before they play again.

City are one of five clubs – with Leicester, Bournemouth, Newcastle and Wolves – facing two games inside 48 hours. Wolves’ turnaround is the tightest at 44 hours and 45 minutes, though most clubs are, like City, playing two games across three days. Only Arsenal, Chelsea, Sheffield United and Liverpool – who have played two games in four days in Qatar – have avoided this.

After City play at Wolves on Friday they host Sheffield United, who will have had a 75-hour break, on Sunday and Everton four days later. They and Wolves have five days’ break after this weekend’s games, at least one more than everybody else, but must then play four games in eight days. The last of those is in the FA Cup.

“I wrote a letter to the Premier League to say thank you,” said Pep Guardiola, with City also known to have made verbal complaints. “We are going to the fridge after Wolves to get ready for Sheffield United.”

This is not the level of conspiracy theory in which José Mourinho would habitually indulge during his time sparring with Guardiola when they were managers of Real Madrid and Barcelona but there is an increasing hint of paranoia about Guardiola. Even on Saturday he was happy to return to the apparent winner his side had disallowed for handball against Tottenham on the second weekend of the season. “I still don’t understand how they disallowed that goal, honestly,” he said. “The players from Tottenham said, ‘Why was it disallowed?’ and even [the goalkeeper Hugo] Lloris was laughing.”

From that decision – which although a shock to most in the ground, was correct under the modern law – Liverpool had the advantage. “When you are not in the high level,” Guardiola went on, complaining about having to play two games a week, as though Liverpool’s fixture list had not been at least as congested, “the little details can make a difference. When the opponent is better I’m the first guy to say, but in specific moments in the season, when we are not on top … next season will be better, I’m pretty sure of that.”

Guardiola has urged City’s fans to support the team more in difficult moments, as he felt they did after Leicester had taken the lead on Saturday. “I had a feeling that always they were there when we played good,” he said, “but I want more when we struggle a little bit. We conceded one when we were playing incredibly well and we needed them. Mum and dad are always there in the bad moments with their kids, not only the good ones. Today I thought the spectators were incredible.”