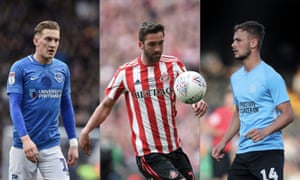 It was little solace to a sore Sunderland dressing room at Wembley in May when Jack Ross said play-off heartbreak would strengthen his team but now, 10 weeks on, is the time to prove the bruising was not lasting. They froze that day, being too predictable, sheepish and slovenly in possession. Ross’s side came away empty-handed after a 61-game campaign despite losing only five times in the regular season. Nineteen draws hamstrung their automatic promotion hopes but they look primed to challenge for a top-two finish this time and the biggest question marks surround Ross and not his squad.

Supporters felt sure Will Grigg would fire them to promotion after Sunderland had an eighth bid, of £4m, accepted on deadline day in January but the striker’s return of four goals in 18 appearances was disappointing. If Grigg can rediscover the form that helped Wigan to promotion from this division in 2017-18, when he scored 19 league goals, they will be halfway there. Given the subsequent arrival of Marc McNulty on a season’s loan from Reading, Sunderland’s main task may seem to be how to load them.

Lee Cattermole has departed but they still possess plenty of nous. In Jordan Willis, the former Coventry captain, and George Dobson the manager has added another couple of leaders. Aiden McGeady is an outstanding performer at this level while Duncan Watmore can shine if he steers clear of injury. There are also talented youngsters, from homegrown winger Elliot Embleton, fresh from impressing at Grimsby, to Benji Kimpioka, a raw Swedish forward.

Portsmouth were head and shoulders above most of the division until suffering winter blues, which coincided with Ronan Curtis’s form tailing off, but the Republic of Ireland winger should return stronger after a dream debut season and Pompey look well equipped to go the distance. Kenny Jackett appears to have filled the void left by Matt Clarke, who has joined Brighton, with the signings of Sean Raggett and Paul Downing while the loan capture of Ross McCrorie from Rangers, who is highly regarded by Steven Gerrard, seems shrewd. Ellis Harrison failed to make the grade at Ipswich but the former Bristol Rovers forward gives Jackett another dimension in attack. If Jamal Lowe stays put amid Championship interest, Pompey will be hard to stop.

As Peterborough’s chairman, Darragh MacAnthony, put it, they have not messed about this summer. “We want to deliver an historic season for our fans and we believe we can,” he said. “We want promotion, let’s not make any bones about it.” Darren Ferguson, in his third spell, is seeking his fourth promotion with them and few teams can boast such an impressive attacking armoury. Mo Eisa, from Cheltenham via Bristol City, represents their marquee signing, the striker arriving for a club-record £1.3m to complement Ivan Toney, who was prolific last season.

Posh have re-signed George Boyd and again recruited the cream of the crop from clubs beneath them, with Frankie Kent arriving from Colchester, Dan Butler from Newport, Christy Pym from Exeter and Serhat Tasdemir, an exciting teenage winger who started at Blackburn, signing from Fylde.

If Ferguson can coax more out of youngsters Idris Kanu, Siriki Dembélé and George Cooper, the results could be mouth-watering. “Technically he is way above this level and I said to him: ‘You’ll either be in the Premier League or Love Island in the next couple of years,’” said MacAnthony of Cooper.

Paul Lambert and Ipswich had four wins in seven months, paving the way to relegation, but James Norwood should end their struggle to score, Alan Judge will terrorise defenders if he can stay fit and the youngsters Flynn Downes, Jack Lankester and Andre Dozzell, who has been tracked by Norwich, will have an opportunity to flourish. When Ipswich signed a dozen players last summer the prospect of them gelling was wishful thinking but, 12 months on, some of those faces could thrive, with Janoi Donacien and Kayden Jackson determined to be a hit.

To mark a new Oyston-less era at Blackpool the club reappointed Simon Grayson as manager, a serial promotion winner from this division who led the Tangerines to the Championship in 2007. Sullay Kaikai, for so long seen as the heir to Wilfried Zaha at Crystal Palace, is an exciting signing as Grayson seeks to get a team, free from chaos, on an upward trajectory.

If Coventry can adapt to playing away from home for the second time in five years Mark Robins’s side could threaten, while a more dynamic Lincoln may surprise following promotion; Jack Payne, Jorge Grant and Joe Morrell are intriguing additions. The incomings at Shrewsbury suggest Sam Ricketts’s side are serious about making a play for the top six; they have signed players from both ends of the spectrum, with the Chelsea teenager Luke McCormick and 35-year-old Millwall striker Steve Morison arriving on loan. It is difficult to discount Rotherham’s chances of bouncing back under the inspiring Paul Warne, despite losing Semi Ajayi and Will Vaulks to West Brom and Cardiff respectively.

Bolton and Bury have, inadvertently, spent the summer battling it out for the tag of the worst-run club in the country. That the latter submitted a team sheet comprising 22 trialists against Nantwich Town for a friendly three weeks before the beginning of the season tells its own story. Both start a shadow of their former selves, bogged down and beset by interminable takeover sagas, with skeleton squads and a 12-point deduction. Bury’s plight is such that their opening game has been suspended.

Wally Downes worked wonders as AFC Wimbledon avoided the drop and has strengthened the squad, including the intriguing signings of Nesta Guinness-Walker and Adam Roscrow from Metropolitan Police FC and Cardiff Metropolitan University respectively. Accrington Stanley, who limbered up for the new campaign with a friendly win over Marseille, will be tested as they seek to avoid second-season syndrome. Wycombe, Southend, Rochdaleand Oxford look worryingly light in key areas.

The striker came through the ranks at Bournemouth but had to drop into non-league in search of game time. After being released by Yeovil two years ago Goodship was a big hit at the part-time Southern League Premier Division side Weymouth, scoring 77 goals in 97 games (including five hat-tricks) and earning England C recognition in March. “It is nice to get back into full-time football,” the 24-year-old said. “I’m hungry to succeed.”

Boyd will, according to the Peterborough owner, MacAnthony, finish his Football League career where he started it more than a decade ago following his release by Sheffield Wednesday. Ferguson believes the 31-year-old, who made his name as a winger, can be a force in central midfield.

The striker has quit teaching PE at a primary school in Newark to relive his dream of being a professional footballer. The 22-year-old dropped into non-league with Leamington after being released by Notts County and caught the eye of John Coleman, also a former teacher, after scoring 28 goals from October last season.