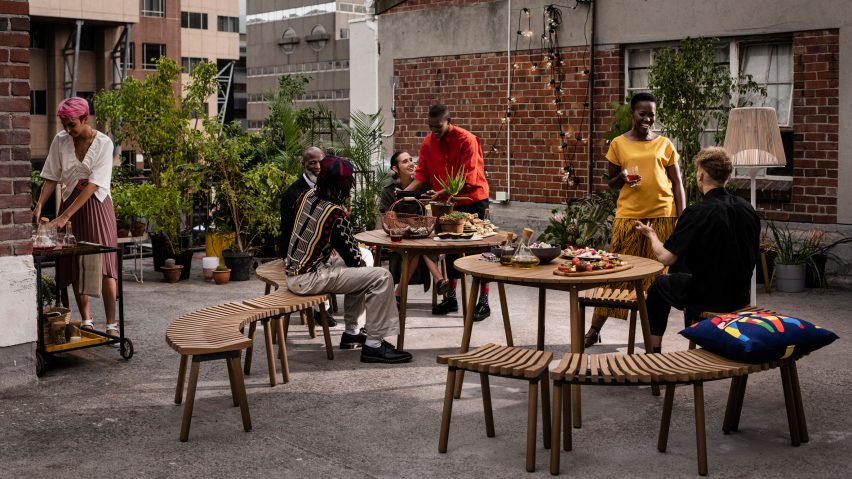 A chair that is “perfect for hacking” and baskets made from faux hair braids are among the products created by African designers for an IKEA homeware range.

It also includes textiles that reference African landscapes, rugs made from recycled crisp packets and a bench designed to encourage socialising.

The project is the result of a partnership with Design Indaba, which had the task of picking which designers should be involved.

IKEA hopes the project will show the world that there is an explosion of creativity coming out of Africa right now.

“They were quite interested in what was rising from the top out here in Africa, that Africa is now,” explained Design Indaba founder Ravi Naidoo. “They wanted to capture this in some way, and asked if we could possibly assist with finding some great people of Africa who could be most representative of this spirit.”

“Because they are a furniture company, we didn’t necessarily go and pick furniture designers,” he continued. “We actually picked good thinkers. We just went across and found people who are really getting out there, taking risks and expressing themselves, and who represented the best of the African creative bug.”

Selly Raby Kane’s product comes from her self-professed “obsession with hair”. She designed a basket, available in two sizes, made from textile fibre designed to look like braided hair.

“To me, it’s a way of referencing the ritual of braiding in West Africa into the homes of the world,” explained Kane. “I hope that when people see the basket, their curiosity is sparked, and that they connect with trans-African rituals and dig deeper into the archives.”

Issa Diabaté, an architect and designer from the Ivory Coast, designed a simple chair that reflects the African approach to living outdoors and indoors. Made using only a single sheet of plywood, the chair is designed to be tailored to its user’s needs.

“I wanted to design a pleasant and functional object without using costly materials or sophisticated technology,” said Diabaté. “This chair is made out of a sheet of plywood and a jigsaw, technically. No necessity for nails, glue or screws or any other complex fabrication process.”

“The patterns are inspired by where I come from, and by the journeys I’ve made,” he said. “I hope it will bring comfort and pride to people.”

Khumalo looked to South African cities – Johannesburg in particular – to generate her bold patterns, while Rossouw was interested in the form of the African elephant.

Studio Propolis, led by designers Naeem Biviji and Bethan Rayner, have created a range of products designed for flexible cooking and dining,” in the spirit of utility and flexibility”.

They include a stool and bench that can be grouped with others, a cast iron dish with a lid that doubles as a skillet and a trio of cork pot stands.

Senegalese designer Bibi Seck designed a woven rocking chair and footrest based on the memory of sitting in his mother’s garden in Dakar.

Finally, Egypt-based Reform Studio created their products using difficult-to-recycle crisps packets. These creates strands of silver through their jute rug, as well as through tote bags.

The products are set to launch in stores worldwide this year. They are also on show this week at Design Indaba, which continues until 1 March.