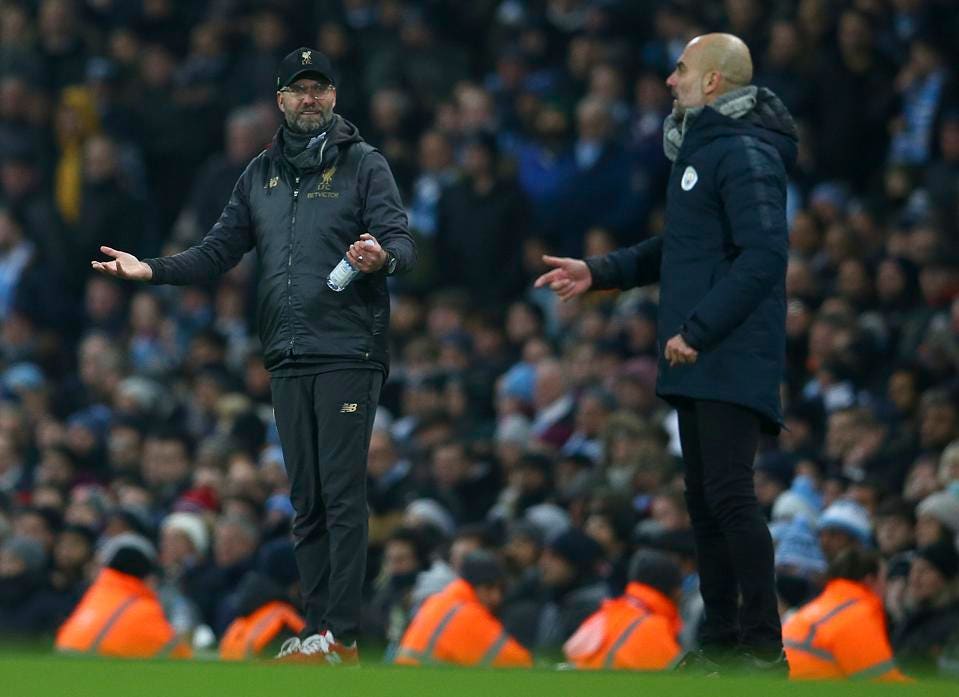 Liverpool’s coach Jurgen Klopp, left, and Manchester City’s coach Pep Guardiola do not have to face each other again in the league this season. (ASSOCIATED PRESS Photo/Dave Thompson).

The Premier League title race looks set to go down to the final weeks of the season after Manchester City and Liverpool both won this weekend.

With only eight rounds of matches left of the season, holders City are a point above second-placed Liverpool.

As the season enters its final weeks, this season’s champion will need nerves of steel – and probably a bit of luck – to clinch the title.

City and Liverpool face busy fixture lists as both are still involved in the Champions League and City also have an FA Cup quarter-final to look forward to next weekend.

The cliché goes that there are no easy matches in the Premier League, and pressure can get to the best players. But these five fixtures look like being crucial in determining which team is crowned champions.

Neither Liverpool nor City have a run-in that should daunt them but this home fixture against Spurs is likely to be one of the Reds’ tougher tests. Though Spurs’ brief title challenge has faded with a recent dip in league form, they remain one of the league’s strongest sides.

Liverpool deserved their 2-1 win at Spurs earlier in the season, but should take nothing for granted when the pair meet at Anfield. In the same fixture last season, Spurs secured a 2-2 draw thanks to a dramatic 95th-minute penalty. The scorer that day was Harry Kane and Liverpool’s defence will be fully focused on keeping him quiet this time around.

A few weeks later, another big home match for Liverpool and one that will feel especially poignant to fans. Almost five years ago to the day that this match will be played, Liverpool lost 2-0 at home to Chelsea in a match which took the title out of Liverpool’s hands. On April 27 2014, a slip by Liverpool captain Steven Gerrard, which the former skipper admitted last week remains an “open wound”, allowed Chelsea into score and City took advantage to win the league.

Liverpool will be determined to exorcise that ghost but Chelsea will not roll over. Despite an indifferent season, Chelsea are very much in the hunt for a top four place and will fancy their chances of getting at least a point here. If they can again ruin Liverpool’s bid for a first title in 29 years, that will be a bonus.

Third-placed Spurs again feature, with this April 20th fixture looking like one of City’s trickier assignments. Spurs will almost certainly be in a fight of their own for a crucial Champions League place. They will be desperate to pick up as many points as they can – particularly if they come away from Anfield, in March, with nothing.

City have won their last three in the league against Spurs, including a 4-1 thrashing at the Etihad Stadium last season. But Spurs have a good historical record against City and have been something of a ‘bogey team’ for the Champions in the past. City can be susceptible at the back and if Spurs forward line are firing, this match could go either way.

If there’s one thing Manchester United fans would love more than beating rivals Manchester City, it’s beating them to kill their chances of retaining the title. Of course the alternative – Liverpool winning the league – is probably only marginally more palatable to United, but seeing their city rivals win again would surely hurt more.

City have won their last two league visits to Old Trafford and these matches have plenty of spice, even when the title isn’t up for grabs. United have been resurgent under Ole Gunnar Solskjaer and the interim boss will see this as a great opportunity to prove his worth to the board and further endear himself to the fans.

Newcastle United Vs. Liverpool – May 4

Newcastle should be well safe from relegation by the time this match is played on the penultimate weekend of the season. There is no especially great rivalry between the clubs, but Newcastle boss Rafael Benitez’s connection to Liverpool should make this a lively encounter.

Benitez is adored by the Liverpool fans after he masterminded their Champions League win in 2005. But his focus now is his current club. Whatever affection he holds for Liverpool, he’d surely love to get one over his former employers with a win here, even if it means handing City the title.