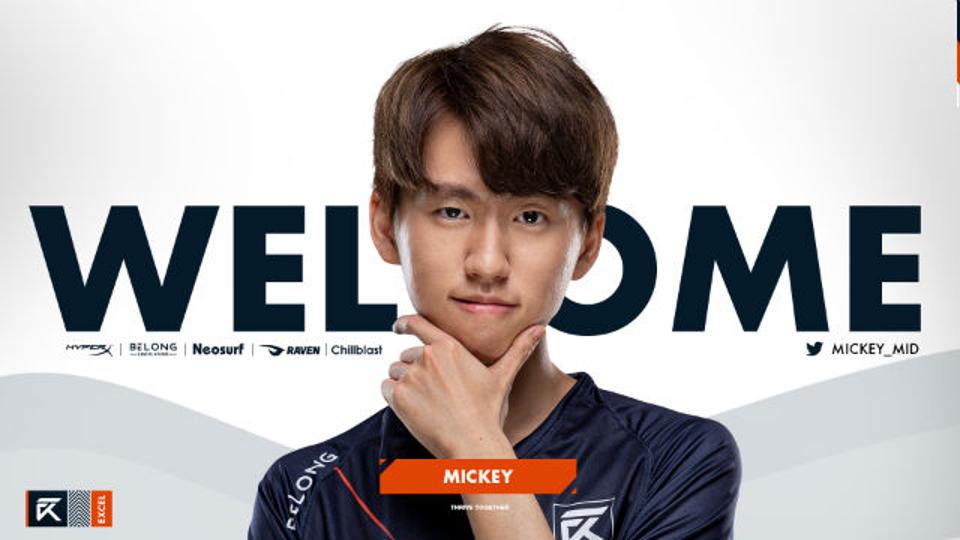 Excel Esports has announced that mid laner Son “Mickey” Young-Min has resigned with the team for the 2020 League of Legends competitive season, pending Riot Games’ approval.

Mickey joined Excel for the Summer Split this past season and impressed many at the organisation. His skill was clear and he fit in with the team well, which made him an obvious choice when it came to looking for their mid laner for the next season.

“I can’t wait to come back to Europe and compete with Excel again,” said Son “Mickey” Young-Min. “It was great working with Caedrel and Expect last split, and I believe we can reach our goal of play-offs this split.”

Mickey will now join the team for their pre-season training at the Excel HQ in Twickenham Stadium, London. The team will work together on perfecting their play for the opening stages of the 2020 competitive season that will begin in early February.

“We’re so happy to have Mickey back with us for the 2020 season and we can’t wait to see his ability back on the Rift,” said Grant Rousseau, Head of Operations at Excel Esports. “I’m so glad to see how much the community warmed to him last split we can’t wait for him to give the fans at home even more reasons to cheer his name!”

The 2020 season will only be Excel’s second in the top level of European League of Legends competition, having joined the LEC last year when the league was franchised. Despite mostly hovering around the lower half of the table for the season Excel appear to be pleased with their start in the competition and are looking to build on that foundation and establish themselves as a top contender in the coming Splits.

“At Excel, we’re only interested in talent which we know we can develop into the best of the best,” said Kieran Holmes-Darby, CEO of Excel Esports. “Mickey showed he’s an exceptional player last split and we have been working with him, to turn him into one of the best Midlaners in Europe. I’m delighted that he’s chosen to stay with us as we develop him even further.”

After Europe’s impressive showing at the League of Legends World Championship earlier in the year Excel will certainly have to up their game to compete with the very top teams in the region, but as we have seen before, a lot can change during an offseason and even teams that enter as underdogs can become contenders once the new split starts.