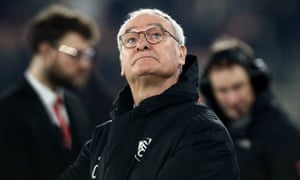 Claudio Ranieri has been sacked by Fulham after the club’s directors and supporters lost confidence in him. The final straw for the manager came in the relegation battle at Southampton on Wednesday, when the team lost 2-0and the travelling fans chanted “you don’t know what you’re doing” at him. It was a seventh defeat in eight Premier League games. Scott Parker, the first-team coach, has been placed in caretaker charge.

The vice-chairman, Tony Khan, was at St Mary’s for a result that took Ranieri’s league record with the club to P16 W3 D3 L10 since he replaced Slavisa Jokanovic in mid-November. Fulham are 10 points off safety with 10 matches to play.

Shahid Khan, the club’s chairman and Tony’s father, is in the US but he took the lead in the discussions over Ranieri’s future on Thursday, which also involved the chief executive, Alistair Mackintosh, and the non-executive director Mark Lamping.

The key decision-makers concluded that Ranieri had been damned by the evidence on the pitch and in the stands, and Shahid Khan released a statement shortly before 5pm to confirm the Italian’s departure, along with the temporary appointment of Parker.

“Claudio Ranieri agreed to my decision that a change was in the best interest of everyone,” he said. “No surprise to me, Claudio was a perfect gentleman, as always. Be assured he is not solely to blame for the position we are in today.

“Claudio walked into a difficult situation, inheriting a side that gained only one point in its prior eight matches, and he provided an immediate boost by leading our club to nine points in his first eight matches. Though we were unable to maintain that pace thereafter, I am grateful for his effort.

Ranieri said: “I am obviously disappointed with the recent results and that we could not build on the good start we made following my appointment. I would like to thank the club, the players and the fans for the support they have given me.”

Shahid Khan sounded resigned to an immediate return to the Championship – Fulham were promoted via the play-offs – and it has certainly been a disastrous season on many levels.

The club spent £110.5m last summer on signings needed to bolster a squad who had been depleted by the loss of many loanees. The conditions were difficult because of the late finish to last season owing to the play-off final and the earlier-than-usual closure of the window on 9 August, plus the fact the World Cup took place.

That said, the majority of the new players have struggled, some because of injury, such as Alfie Mawson, and others because they have failed to find their feet. The most glaring example of that has been André-Frank Zambo Anguissa, who joined for £30m from Marseille. Only Aleksandar Mitrovic, Jean Michaël Seri and possibly Calum Chambers, who is on loan from Arsenal, have shown anything like the required levels.

Ranieri saw his team exit the FA Cup at home to League Two Oldham and his reluctance to trust the 18-year-old wide player Ryan Sessegnon was deeply unpopular with supporters.

There was also the damaging Aboubakar Kamara saga, which came in three parts. First, the striker grabbed a penalty from Mitrovic against Huddersfield, which he missed; second, he fought with him during a squad yoga session; and then, having been banished to train with the under-23s, he was arrested on suspicion of actual bodily harm when he visited the training ground seeking to discuss his future with Mackintosh.

What has most upset Fulham fans this season has been the loss of their reputation for entertaining football, which they earned last season. They have routinely been awful to watch.

Shahid Khan said: “Scott Parker’s immediate assignment is merely to help us stabilise, grow and rediscover ourselves as a football club. If Scott can answer that challenge and our players respond to the opportunity, perhaps victories will follow in the months ahead.

“What’s most important, however, is to regroup in a smart and deliberate manner that will serve our long-term vision for sustainable success. If we’re able to do that and win some matches to make a stand late in the season, all the better.”

We made a choice…

… will you support it today? Our journalism now reaches record numbers around the world and more than a million people have supported our reporting. We continue to face financial challenges but, unlike many news organisations, we haven’t put up a paywall. We want our journalism to remain accessible to all, regardless of where they live or what they can afford.

This is The Guardian’s model for open, independent journalism: free for those who can’t afford it, supported by those who can. Readers’ support powers our work, safeguarding our essential editorial independence. This means the responsibility of protecting independent journalism is shared, enabling us all to feel empowered to bring about real change in the world. Your support gives Guardian journalists the time, space and freedom to report with tenacity and rigour, to shed light where others won’t. It emboldens us to challenge authority and question the status quo. And by keeping all of our journalism free and open to all, we can foster inclusivity, diversity, make space for debate, inspire conversation – so more people have access to accurate information with integrity at its heart.

Guardian journalism is rooted in facts with a progressive perspective on the world. We are editorially independent, meaning we set our own agenda. Our journalism is free from commercial bias and not influenced by billionaire owners, politicians or shareholders. No one steers our opinion. At a time when there are so few sources of information you can really trust, this is vital as it enables us to give a voice to those less heard, challenge the powerful and hold them to account. Your support means we can keep investigating and exploring the critical issues of our time.

Our model allows people to support us in a way that works for them. Every time a reader like you makes a contribution to The Guardian, no matter how big or small, it goes directly into funding our journalism. But we need to build on this support for the years ahead.