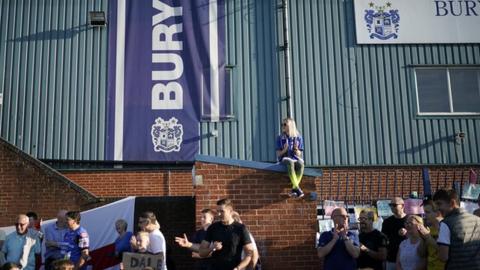 Bury have until 17:00 BST on Tuesday to complete a sale that would prevent them from being expelled from the English Football League.

Shakers owner Steve Dale said last week he had agreed a deal to sell the League One Shakers to C&N Sporting Risk.

Bolton Wanderers face the same Tuesday deadline to make takeover progress or they could also be expelled.

The club’s joint administrator Paul Appleton confirmed “continuing dialogue” was ongoing with all parties in a bid to rescue it.

“Myself and my team will continue to do everything possible to facilitate a deal,” he said in a statement. “We will work tirelessly to get this finalised for the club, fans, staff and wider community.

“The future of Bolton Wanderers is still in doubt, but I have to believe there can be a positive outcome before today’s deadline.”

Bolton had been the subject of a bid by Football Ventures but the takeover collapsed over the weekend, with the club’s administrators warning Wanderers could enter liquidation as early as Wednesday if a resolution is not found.

Should a takeover at Bolton fail to materialise by 17:00 BST on Tuesday, a 14-day notice of withdrawal of the Trotters’ membership of the EFL could be reinstated.

“The current situation cannot continue,” the EFL said in a statement issued on Saturday, prior to Monday’s news.

“If a successful conclusion to a sale is not found or there are no credible plans for the club to continue the season in administration by the planned board meeting at 17:00 BST on Tuesday 27 August 2019, then the EFL board will consider lifting the suspension on the notice of withdrawal of the club’s membership of the league.”

The proposed takeover was beset with problems for weeks and is still waiting to be completed.

Laurence Bassini, who failed with his own bid to buy the club before it went into administration, was awarded a court order blocking the sale on 8 August.

That was amended and adjourned six days later, but the troubled club are now on the brink of disaster.

Could Bury yet run out of time?

Bury were effectively an hour from being thrown out of the EFL on Friday night, having been given until 23:59 BST to prove their financial stability, before news of a possible takeover emerged.

That news provided Bury fans with genuine optimism, but C&N Sporting Risk said it was “disappointing” the extension granted to them was not longer.

“There are a number of serious outstanding issues to be addressed,” the company said in a statement.

“It is disappointing the EFL has chosen to go for such a short extension, especially given this is a Bank Holiday weekend and our main legal adviser is unavailable until Wednesday.”

On Sunday, EFL executive chair Debbie Jevans said the Tuesday deadline could be further extended if a deal was “1% outstanding”.

In a statement posted on Twitter, Bury North MP James Frith added that he “fears the extension is not long enough with so much still to be done”.

Following a meeting of the EFL board on Saturday, the league said that no further Bury fixtures would be suspended because of the integrity of the competition and the impact on other clubs in the division.

The Shakers have not played any of their first six games of the season.

Buoyed by news of a potential takeover, fans turned out in their numbers on Tuesday morning to help clean up Gigg Lane should Saturday’s League One match against Doncaster Rovers go ahead.

On Saturday, the club put out a request asking for volunteers to assist with getting the ground ready…