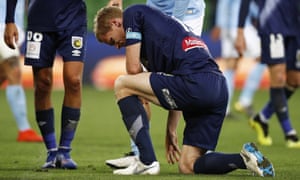 League seasons are a marathon, not a sprint, or so the cliché goes. And if that is the case, the A-League premiership campaign that concluded on Sunday was one of those incorporating a fun-run where the stragglers cross the line in fancy dress hours after the medalists.

The also-rans were dropped by the pacesetters before Christmas. The identities of the top three haven’t altered since round five and the top six haven’t changed since round eight. At the season’s midpoint the bottom four had amassed just seven wins between them.

Distance runners prepare their brains for the pain of hitting a psychological wall late in a race. The A-League’s backmarkers stumbled into their own momentum-ending obstacles on the g of the starting pistol’s bang and have since spent months disorientedly fumbling around walled labyrinths of their own design of which M.C. Esher would have been proud.

As is becoming customary, the most spectacular failure arrived on the Central Coast where the Mariners blundered to their third wooden spoon in four seasons.

An offseason energised by Usain Bolt’s celebrity and the additions of Ross McCormack and Tommy Oar now seems a lifetime ago. A dead cat bounce of sorts under new coach Alen Stajcic (the club’s fifth in as many seasons) means the Mariners can once again sell a story of something approximating hope during the winter months but just 21 wins in five years is proof that something more substantial than a new face in the dugout is required in Gosford.

Until then the primary source of the Mariners’ relevance will be their starring role in the unending debate over promotion and relegation in Australian football.

Something substantial is also required in Brisbane after the wheels fell off the Roar’s bandwagon in spectacular fashion. They conceded three or more goals in a game 12 times during a season that ended with an historically awfuldefensive record. It was the third year in a row that saw a decline in the number of wins as a sequence of questionable squad management decisions bit hard.

Recruiting Robbie Fowler to front the rebuilding job is a bold call by the Bakrie Group, but as with Stajcic at the Mariners a new figurehead provides the club with an optimistic narrative for the next few months and provides supporters the chance to dream about the talent such a big name could attract to Queensland.

But while Fowler will rightly be under the spotlight another late season appointment – the promotion of club stalwart Shane Stefanutto to the role of football director – should not be overlooked.

In a competition with equalisation measures and high player turnover alignment between the suits and the tracksuits at a football club is paramount. Roar are in desperate need of a vision that casts forward a number of years, not just a Fowler-inspired sugar hit.

Fowler’s former teammate Markus Babbel was last season’s prized coaching recruit but the German found the going tough in his first campaign in charge of Western Sydney Wanderers, struggling to know which rein to pull with the unbalanced squad he inherited.

Despite poor results and early grumblings of dissent it would be harsh to pass a definitive judgement on Babbel until he has been given opportunity to refashion the playing group in his image. However, with the hype that will accompany the club’s move to a new stadium and the high expectations of fans accustomed to winning, no coach will be under more pressure at the beginning of next season.

Newcastle were this season’s curate’s egg. Despite little changing in terms of personnel from the side that reached last season’s grand final the magic was somehow missing and the Jets missed the finals for the eighth time in nine seasons.

It was a campaign that highlighted how fine the margins can be in a competition limited by design, one where the under-performance of a visa player or two can hurt disproportionately, or the unavailability of a key figure like Roy O’Donovan for a large chunk can have a profound effect.

The dilemma for Lawrie McKinna and co. is to figure out which version is the real Newcastle – the swashbuckling 2017-18 vintage or the latest misfiring outfit? Does the off-season call for tinkering or an overhaul?

All of these permutations exist within the landscape of the A-League itself altering radically. The timeline for change is extremely tight but plans remain on track for the 2019-20 season to be the first to operate under an independent governance model.

For the nimble operators this offers first-mover advantages. It also risks entrenching the status quo as the constraints of equalisation are slackened, making this coming winter enormously significant for clubs with ground to make up.

This year’s marathon has been run and won. Marathon training is already underway.