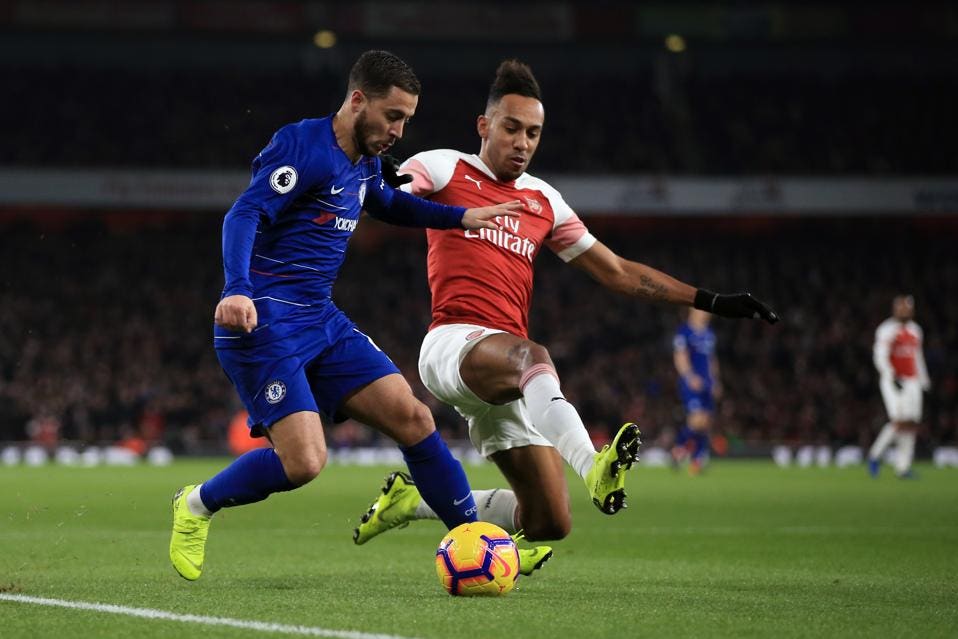 Part one of “the Premier League conquerors Europe” takes place on Wednesday when Chelsea and Arsenal meet in the Europa League final. The other all-Premier League final is set for Saturday, in Madrid, with Liverpool and Tottenham Hotspur vying for the Champions League title.

At stake for Chelsea is another European trophy to add to the other five won since 1971. For Arsenal, making it a hattrick of European trophies is very much secondary to the automatic qualifying spot to the 2019/20 Champions League group stage that goes with winning the Europa League.

Chelsea has no such pressure having finished 3rd in the Premier League, Arsenal was 5th, two points fewer than Chelsea.

It could be the last game in charge of Chelsea for Maurizio Sarri – whether he will be fired or he joins Juventus, ]}has still to be decided. 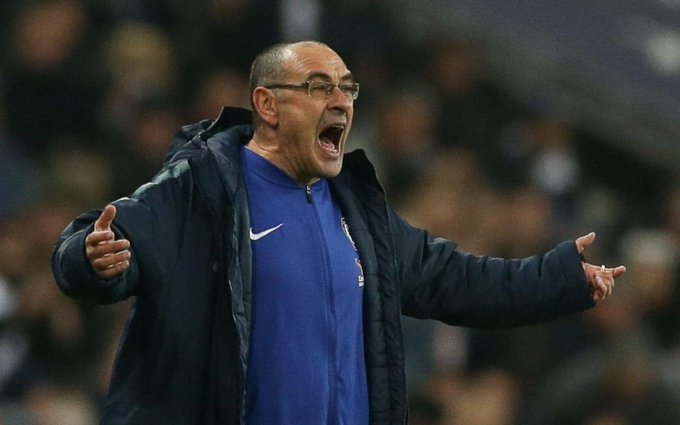 Chelsea striker Eden Hazard could also be bringing the curtain down on his Chelsea career. Hazard’s contract is up in the summer of 2020 and so far he has shown no inclination to sign a new one.

Rather than losing Hazard to a “Bosman” transfer, a $120m move ]to Real Madrid this summer is a strong possibility.

The Arsenal squad needs new blood but who might move on is simply conjecture at the moment.

Given that the game is being played in far off Azerbaijan, both teams are well away from home. However, a home team in a game played at a neutral location is always designated, and in this case, it’s Chelsea.

Where, when, and how can I watch

The game is being played in the Olympic Stadium in Baku, Azerbaijan on Wednesday, May 29, with an 11:00pm kick-off local time…..yes, one hour before midnight. That puts the start of the match at 3:00pm ET.

With a stadium capacity of over 68,000, there are tickets still available according to UEFA.com. Arsenal and Chelsea were allocated 6,000 tickets each, but the word is that it has not been an easy sell given the arduous trip and the costs. Nonetheless, local officials are confident of a good crowd.

In the US, you have a number of viewing options –  TNT, UniMas, Univision Deportes Network, and fuboTV. Canadian viewers can watch on DAZN.
View image on Twitter

Definitely missing for Chelsea through injury are Antonio Rudiger, Callum Hudson-Odoi and Ruben Loftus-Cheek. Midfielder and a World Cup winner with France, N’Golo Kante, is considered very doubtful after picking up a couple of injuries over the last few weeks.

Danny Welbeck is an unexpected addition to the Arsenal traveling squad having not played since breaking his ankle late in 2018 against Sporting Lisbon. Defender Rob Holding has missed most of this season after suffering a knee injury and won’t return until the new season. Aaron Ramsey, Hector Bellerin, and Barcelona loanee, Denis Suarez are all injured and will not be considered.

Armenian Midfielder Henrikh Mkhitaryan has not made the trip on account of security concerns relating to the bitter political relations between his country and the host nation, Azerbaijan.

The biggest issue playing on the mind of Arsenal Coach Unai Emery is who to start in goal – Cech or Leno.

Chelsea and Arsenal in Europe

The two London clubs have only played each other once in European competition.

It was in 2004, the season of the Arsenal “Invincibles.” Invincible in the Premier League but not in the Champions League.

After a 1-1 draw at Stamford Bridge in the first leg of the quarter-final of the Champions League, the aggregate score was 2-2 with extra time looking likely. But, up popped an unlikely scorer in the form of Chelsea left-back Wayne Bridge to give Chelsea a 3-2 win. Chelsea went out in the semi-final round to Monaco.

Without Aubameyang or his striking partner, Alexander Lacazette, playing well it is difficult to see a way Arsenal can beat Chelsea. Lacazette and Aubameyang combined to score all of Arsenal’s 7 goals in the semi-final against Valencia.

By the same token, the striking partnership of Aubamey and Lacazette could easily be undermined by an Arsenal defence that oft times is as useful as a chocolate teapot.

So for Arsenal to win Aubameyang, Lacazette and the defence need to play very well. If one or both doesn’t turn up, the Europa League trophy will be adorned with blue ribbons. 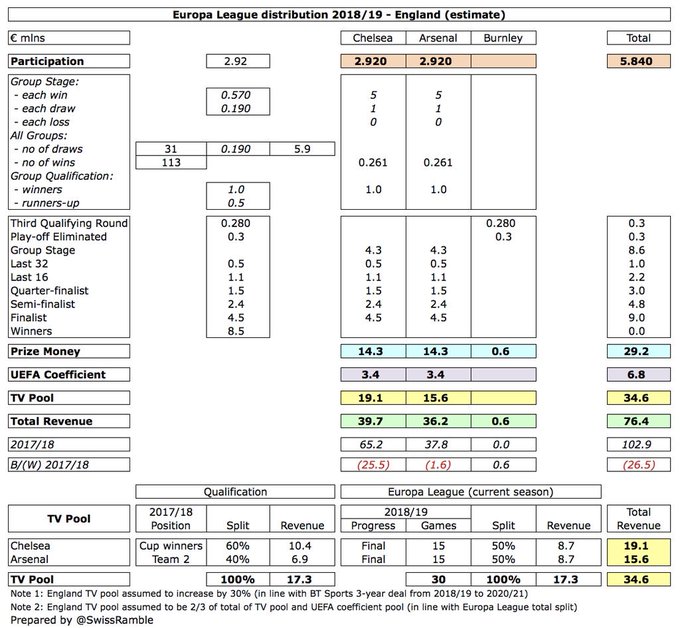 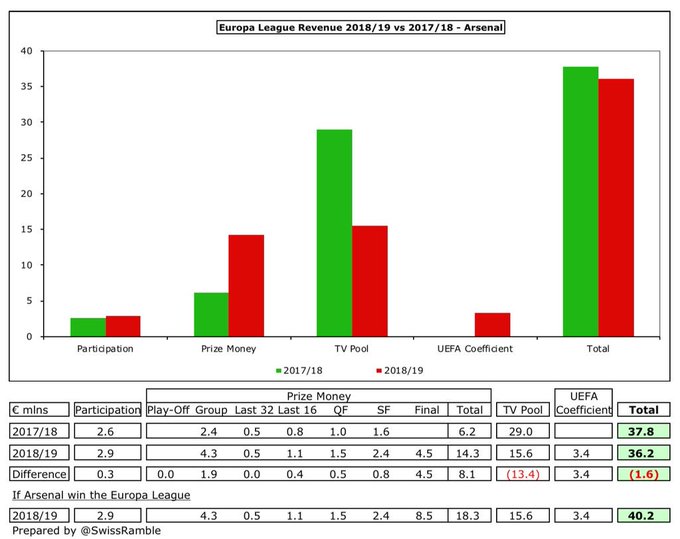 19 people are talking about this

The Trophy weighs 15kg so if there are any children around during the post-game celebrations, let’s be careful. They may not get off as lightly as one of Cristiano Ronaldo’s wee ones. 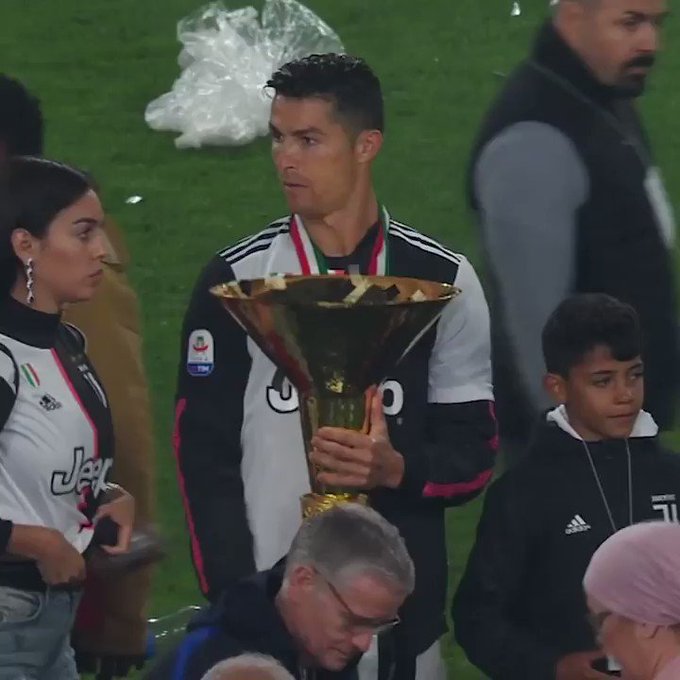 1 – Should Chelsea win, it will the first major trophy for Maurizio Sarri.

3 – If UEFA ever considers renaming the Europa League trophy they may want to ponder the name, Unai Emery. The Arsenal coach has already won the competition three times (2013–14, 2014–15, 2015–16) with Sevilla. Emery has been involved in 73 Europa League matches with the next nearest manager at 52.

5- Surprisingly, given the high-wire act that is the defence, it is the number of clean sheets posted by Arsenal in the Europa League this season.

7 – The number of assists recorded by Chelsea’s Willian in this edition of the Europa League.

8 – The goals scored by Arsenal’s Pierre-Emerick Aubameyang in this season’s Europa League.

10 – The goals scored by Chelsea striker Olivier Giroud, who is the joint top scorer in this season’s Europa League with Eintracht Frankfurt’s Luka Jovic.

11 – The number of Europa League games this season won by both Arsenal and Chelsea. However, Chelsea is unbeaten having drawn 3.

17 – The number of games unbeaten in the competition by Chelsea and it is a record. The streak started in April 2013.

93 – The minutes on the clock when Ivanovic scored the winning goal for Chelsea in the 2013 Europa League final against Benfica.